There has been a lot of chalk talk about last week’s mysterious Google update, but up until now we haven’t been able to bring forth anything more than the obvious: major shifts were cropping up in rankings. We decided to roll up our sleeves and get any insight we could from the data we have; after a good amount of data-slicing, we’re back with some answers.

Just like Mozcast and Algoroo, our Google Algorithm Changes tool reported extremely unusual ranking changes around the date of June 19, 2015.

More precisely, 35% of all 583,140 URLs tracked changed their ranking by more than 10 positions. There’s no doubt that this is huge. “Colossal”, as Dr Pete so eloquently put it.

Changes were major in all three countries we’re tracking:

Nevertheless, there is a lot of uncertainty regarding the cause of all that shifting. A couple of very good theories were expressed over the past week. Dr Pete dove into their data and found that there is a strong connection between the update and HTTPS. He was also first to form the hypothesis that it may all be a consequence of the giant Wikipedia’s migration to HTTPS.

But according to Google representatives, the update was neither Panda, Penguin or HTTPS. They said that this was just one of their continuous tweaks to the core algorithm. No indications on what was changed in particular.

More insights came from Searchmetrics’ quick analysis of their data, which pointed out that “this update seems to be primarily concerned with trending keywords as well as temporary search intentions related to informational (shorthead) keywords.” According to their data, media websites were most favored by the update.

The research we carried out is based on the data we’re tracking with the Google Algorithm Changes tool, and relies on SERP data for approximately 10k keywords and 580k URLs, across various industries.

Here’s what we found:

Wikipedia only accounts for 0.34% of changed URLs

On June the 17th, 92.54% of all the URLs we’re tracking changed their rankings. One third of all these URLs got shifted by more than 10 positions.

Although Wikipedia is at the top of the list of domains who changed their rankings, their URLs account for only 0.34% of changes in our data set. That means that at least for this set of data, the giant website is not responsible for the entire movement in SERPs. While it may have caused other URLs to shift as well, it would be nevertheless very unlikely that 0.34% of changes have shaken the entire SERPs by themselves.

As Wikipedia continues its transition to HTTPS, we’re keeping an eye on the SERPs hoping to observe any changes that may result from this development. For the moment, the past few post-update days were extremely quiet in all three countries we’re tracking.

Nothing unusual among the most affected domains

By looking at the list of most affected domains for this update we were not able to spot any unusual patterns, or to find additional clues to support Searchmetrics’ hypothesis. While Wikipedia leads the changes list in our data set, sites like Amazon.com or Yelp.com have amassed more than three times the amount of changes felt by news publications such as nytimes.com or huffingtonpost.com. 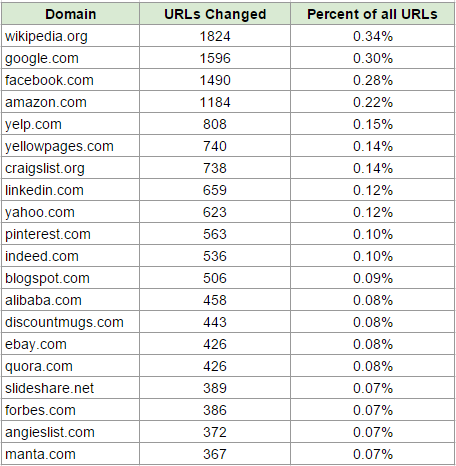 Most HTTPS URLs have changed their position

Here comes the most interesting part. Most of the HTTPS URLs we’re tracking have changed their position in search; not only that, but 68.13% of these shifted with more than 10 positions!

Tweet this: 2 out of 3 HTTPS URLs changed their rankings with at least 10 positions

For comparison, here is the ranking behavior we saw for the non-secure HTTP URLs: 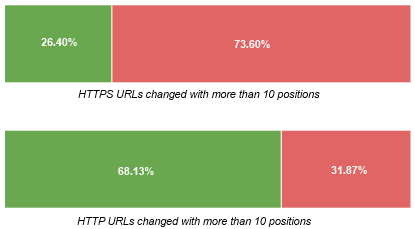 With that many changes and hundreds of HTTPS URLs dropping out of top 50 results, the hypothesis of a Google update focused on HTTPS becomes extremely plausible, regardless of Google’s contradicting statements.

We’ll keep you posted as soon as we have something new to share on this. 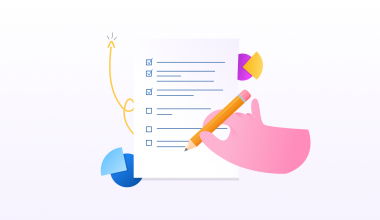